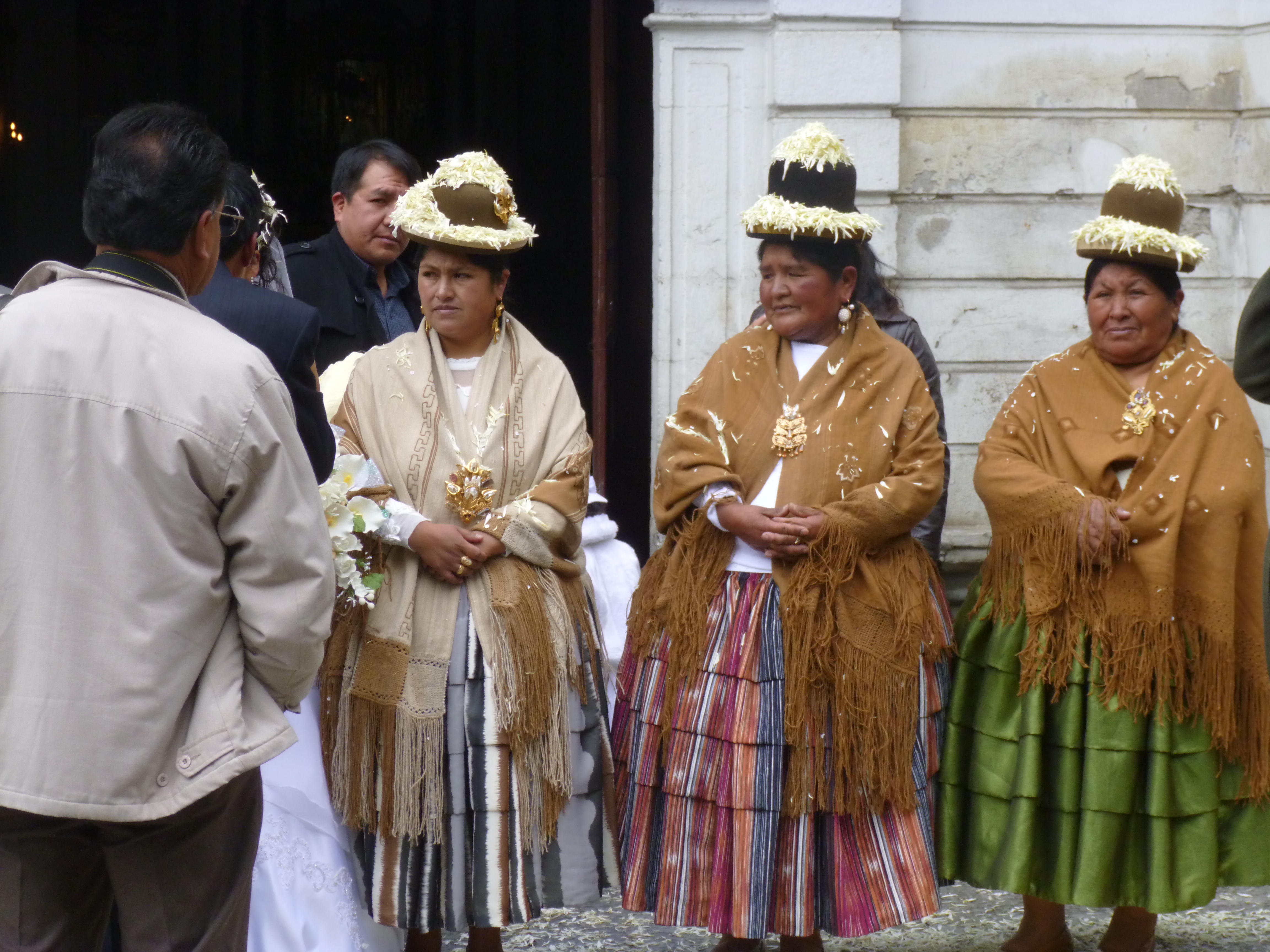 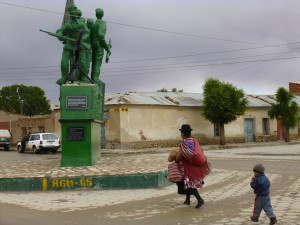 Arriving back to civilization after 3 days of being on the road the first thing that you crave is a shower, a cup of tea and (clean) toilets. There are only so many baby wipe/Turkish showers you can have over the course of a few days. Now Niamh and I, are no princess’ and being festival goers we are well used to roughing it for a few days but to say that the first shower in Uyuni was bliss is an understatement.

Uyuni for those who have been or have heard of it, doesn’t spring to mind a salt flat paradise in fact most would say: ‘get in and get out of it pronto’. For us however we expected it to be as bleak and horrible as was described and we were pleasantly surprised. Again best to expect the unexpected: 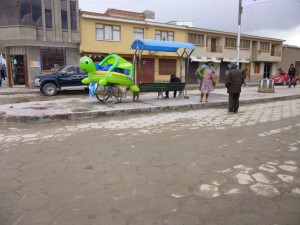 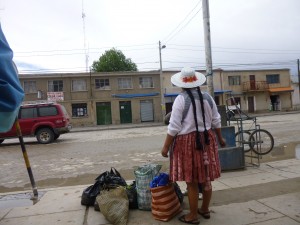 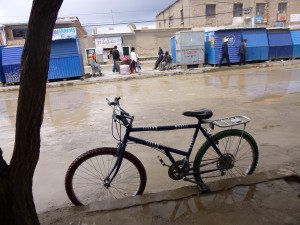 We stayed in a hotel – 1 star by home standards but 5 star by Bolivian standards, Hostal la Magia de Uyuni.  Ruth, our Swiss friend bunked in with us for the night and once cleaned and refreshed we went out for pizza to meet our former 4×4 team. 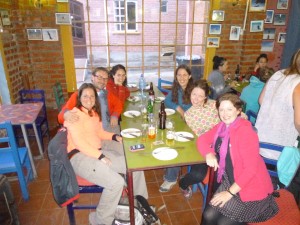 Earlier that day I had spoken to an Irish couple who we randomly bumped into on their way to the salt flats and they were in the restaurant that night when I got talking to them again. Within a few minutes we discovered that the girl was in fact a sister of a girl I know through a friend at home. But more importantly they were meeting her and my friend Niamh Hayes two days later in Mendoza , Argentina. I had heard about this couple who were travelling for months way back in November. Honestly the coincidence was impressive and it was great to finally put faces to a name.  We really haven’t met that many Irish on the trip so to have met some that have a connection to home gives you that warm fuzzy feeling and the knowledge that even though Ireland with all its misery right now is a place I can proudly call home.

So onwards from Uyuni the following day Ruth, Niamh and I set out to the Unesco town of Potosi. Famous as a mining town, we really hadn’t planned this stay but had heard from several other travellers that a trip to a mining town and the mines themselves was a must as it’s a strong part of South American culture but more significant for Bolivia in terms of heritage and industry.

Our four hour journey from Uyuni to Potosi on a regular local bus was entertaining, pugent and had a wilderness toilet stop. Arriving in the higher altitude of 3927m we knew our visit here would be heart palpating-ly interesting. My first impression was the smog emanating from the vast number of taxi vans. I became one of those paranoid Asians very quickly and put my bandana on over my mouth as it was insufferably  nauseating to breath in the fumes. Any attempt to climb a few measly steps and I had to stop and catch my breath. Once I looked beyond my own minor issues my eyes were open to the harshness of the town. The locals were way older than their years and there were a lot more women on the streets than men.  We learned later there was an unusual percentage of widows as they lost their husbands to the mines. From one street to the next, there were multiple sellers, selling their glucose high riches peppered from above with historic building and then half completed modern shambles. A smelting pot of old and new but mesmerizing to the eyes as your mind tried to make sense of the mayhem. 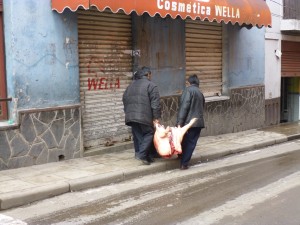 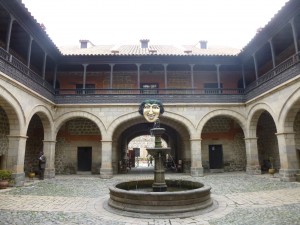 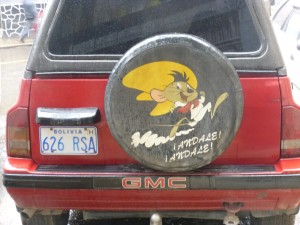 The thing about urban Boliva you cant take it at face value, the book can not be judged by the cover, you must jump in and fold back the pages. When you went into a building or restaurant what you found inside was always interesting whether it was good or bad. 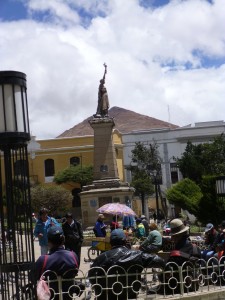 We sampled many restaurants in the town over our two days and some better than others but the service was consistently slow and complex. We shared our meals with a lovely Chilean girl and Brazilian girl when had met on our 4×4 trip and they joined us on our adventure to Potosi.

The following morning we set out on our Mine tour, all three of us were apprehensive at the prospects of not only being cramped in a cold wet cave but also what we expected to see. Everyone had said it was sad and moving but still we were a little bit green or may I say I was green thinking it would be fine, I would be fine and I would learn so much about the misfortune that these miners were subjected to.

We enjoyed the dress up part of the tour, becoming a miner for a half day. Here are some pics., our smiles were swiftly wiped from our faces as we were brought around the ‘production’ plants prior to going to the  mines themselves. 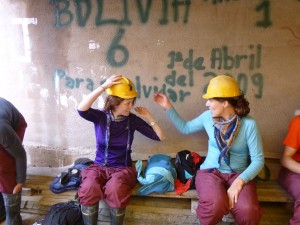 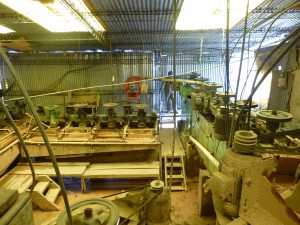 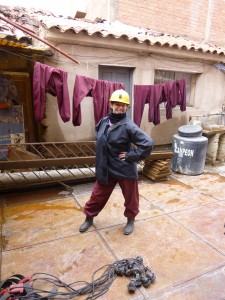 They were death traps to see the least and if you worked in any environment where health and safety is prominent that’s where you would have begun to freak out. It was difficult to believe this was not only a spot for tourists but men worked in these conditions ever day but compared to their colleagues in the mines these guys worked in prime conditions. Post this production plant visit, we were brought to buy ‘presents’ for the miners. As it was Friday were encouraged to buy alcohol as well as dynamite, water and juices. They don’t eat while in the mines as this exasperates the inhalation of toxic gases and dust into the stomach, which causes various complications.

Once we had bought our wares , we were bused up to the mountain that shadowed over Potosi ‘Cerro Rico’. 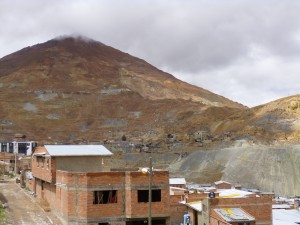 Within a few minutes we were in the full darkness and dreariness of the mines themselves. Fumes, lack of oxygen and hissing pipes are the first things you notice. Those first 5 minutes I was lulled into a false sense of security that this would be fine. Fast forward another 10 minutes and we were getting deeper into the darkness when we met the first miners. These miners were showing the full affects of a controlled explosion that they had detonated a few minutes previously. Their faces, bodies, clothes were covered in a dark, wet stank grey dirt and their eyes burned out of their heads. They looked grim, exhausted and way older than their early 20 years. The guide quizzed them on our behalf..like a robot. What age are you? How long have you worked here etc? It was so cringe worthy and tear jerking it was difficult to witness and experience. 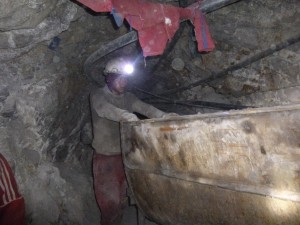 As their time out they had come to visit  ‘El Tio’ (the Uncle). He  is the protector/owner/manager of the miners whom the miners visit every day and share a drink/cigarette/ an offering in the hope that he will mind them and keep them safe while they work. 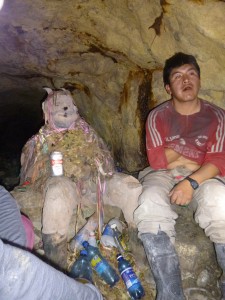 We crawled on our hands and knees also to visit El Tio and it was on this claustrophobic voyage that I knew deep down I couldn’t stand to be in this place much longer.When asked were all ok Niamh and I nodded to each other knowing we wanted out. We were 1 hour in and with 1 more hour to go we knew couldn’t handle any more harrowing scenes than we had already witness. We had the experience and not one we wanted to return to any time soon so antoher guide brought us back to ‘normal’ air. Ive never been so happy to see this light at the end of this tunnel. 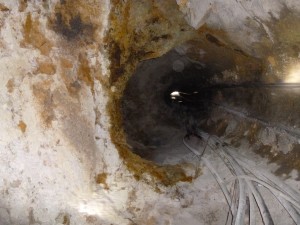 While we waited for the others to finish we sat outside in the equally bleak site where the miners brought back up the minerals. This was no ‘Wish you were here moment’. As the guide says this is not tourism this is a social experience. He was 100% correct, this was not a hoiday this was our chance to learn about how the misfortunate other half live. The face of that young 22 year’s face covered with dark grey soot will haunt me for many a year to come.

Back down to the reality of Potosi we did what we could to not dwell on what we had seen but rather plan the next step of our voyage for that night. Ruth would leave us the following day and we would set out for La Paz on another mammoth journey.

After a week of hanging out with Ruth between meeting in Chile and going on the 4×4 trip we were so sorry to say good bye to her but knew deep down she was one of the few we will definitely see again. Here is Ruth holding the smallest map ever! 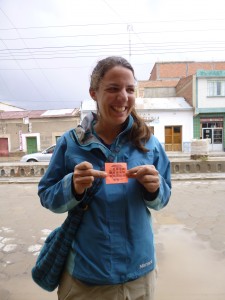 That night we set off for our 12 hour journey to La Paz. Again we had been well warned of this cities in-hospitatbility and warnings of not staying there very long and yet again we had such a different experience.

Arriving to our welcoming hostel with its fab breakfasts and warm showers right in the heart of the city down by Plaza de San Francisco we knew we would be comfortable there.Rambling around the witches markets, where the foetus’ of baby Llama’s hung and potions to bring love, health and wealth lay we enjoyed some ‘tourist’ shopping. 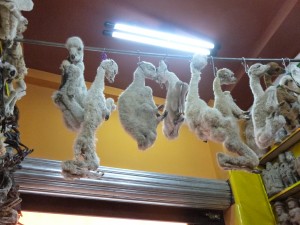 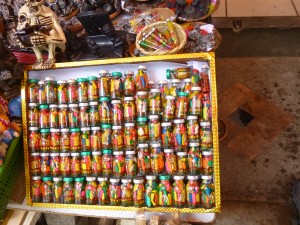 With every step you took in the city, you stumbled upon the modern and the old. It was holding my attention more than I knew and was happy to take it in. 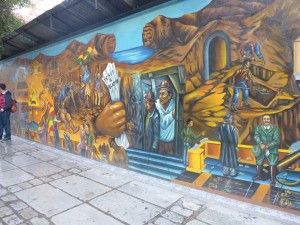 We visited 3 amazing museums in total, one of which featured all the Carnival Masks of the Andean regions with feathered head gear and satan ike coverings its was amazing but unfortunately no pics allowed. We also stumbled upon a wedding, which was a much amusing affair. The bride was far from the happiest one we ever saw and her bridesmaids were a wee bit passed it. Not that my upcoming bridesmaids duties influenced my view but you know what I mean. 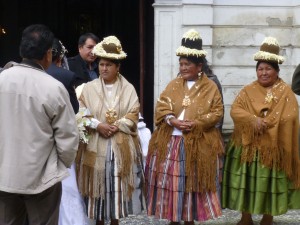 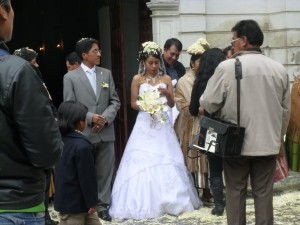 Also our last night as many of you saw on Facebook, we went to check out Loki hostel where my friend from PopCap worked there for a month a few years ago and typical us we got into the spirit of things and ended up wining the pub quiz here is the winning team! Kelly from San Fran and Scott from Melbourne. Good fun and of course our team name was the ‘Medicore Adventurers’ 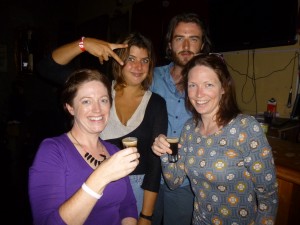 Alas our time in Bolivia had come to an end, the following day we would fly to Cusco in Peru where more adventures awaited.

Hanging with the Harris