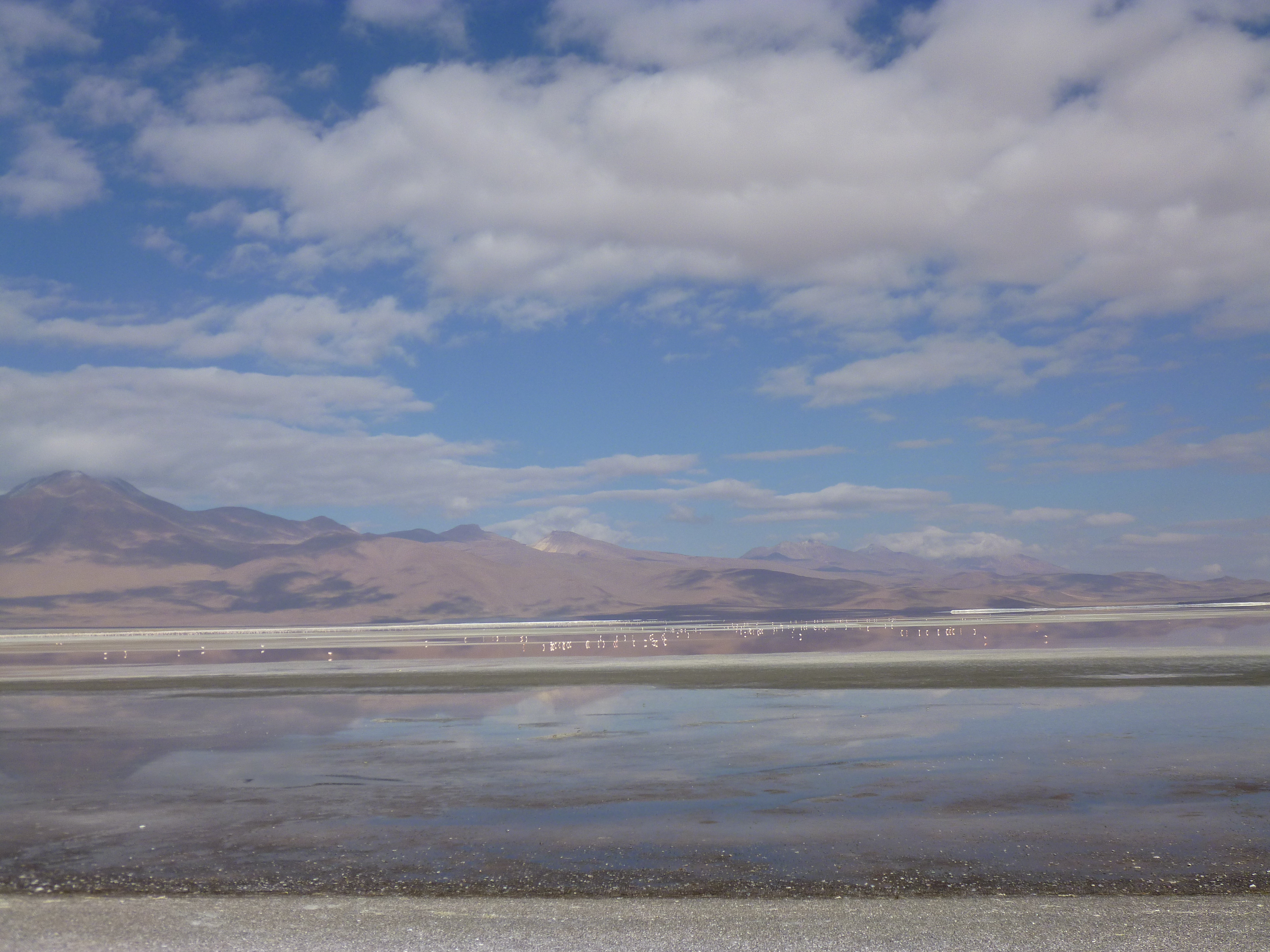 (The largest salt flats in the world)

After a night of heart palpitations and my mind playing tricks on me I was very happy to be up at 4.30 am to set out to see the geysers which were a good 40 minutes away from our refugee hostel that night. Daan, Niamh and I were the only three eager ones to go, so off we set with our driver Theo who orientated his way by the mountains. No sat nav here I tell you. With the sun rising over the geysers and with atmospheric temperatures of 4degrees we got right up close and personal with around 10 geysers. As its in the middle of the dessert there is no protection from the steam or lava that is just feet away from you. Unlike New Zealand where you are ushered to  a reasonable distance we were right on top of these bad boys. All be the smell foul as bad eggs I was happy to be near heat and steam rising from the geysers themselves. Bubbling lava and hot water rose from each. It was so impressive and every geography teachers’ dream to get so up close and personal to such a natural phenomena.

Here are some pics: 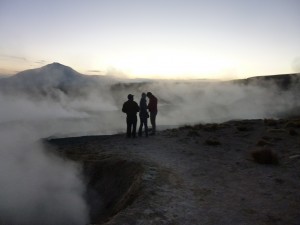 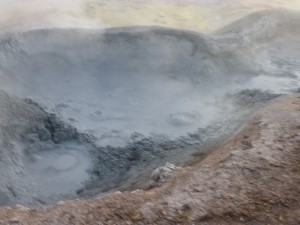 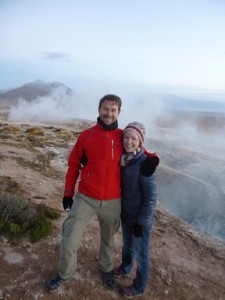 On our way back the driver brought us to some cool canyons in the desert, it was most 6am here. 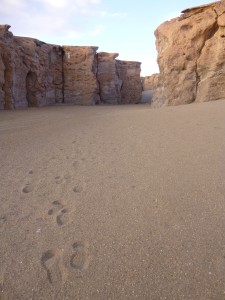 Once back at the hostel and post our first Bolivian breakfast of green scrambled eggs and bread you could use as a weapon of mass descrution it was so tough, we set off to our next lagoon. This was my favourite of all the lagoons called Lagoon Colorado. With thousands of flamingos and their reflection on the water you could only imagine yourself caught in time and this could be 1000s of years in pre-historic times and nothing on this vista has changed except your presence along with all the other 4×4 tours. Having met a fellow Marketeer on the trip Ollie from the UK, it is only in such remote places like this you can appreciate the absence of advertising or brands in your face I can’t believe I’ve had to travel to the remoteness of South West Bolivia to escape what was my previous life. Here only nature exists and co-exists and no man can get in the way. We even asked who eats the flamingos, the driver laughed, no animal does, the cold is the only thing that can kill these beautiful creatures. 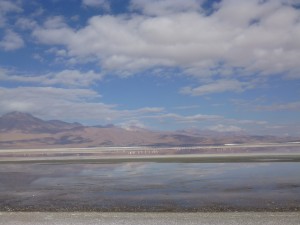 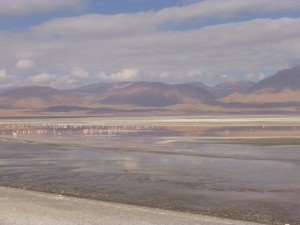 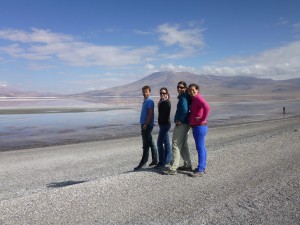 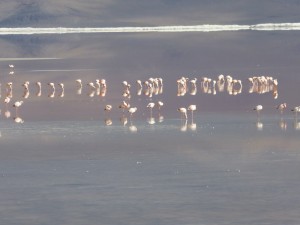 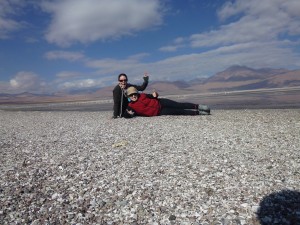 Onwards from here the landscape totally does a handstand and turns green into an Oasis’. We nicknamed it the valley of the Llamas. Hundred of curious llamas feeding and traveling away from the rain that began to fall over the valleys. Little did we know then as we snapped like Japnenese tourists that we would eat these poor fellas cousins a few hours later. Here a Llama outstanding in his field! 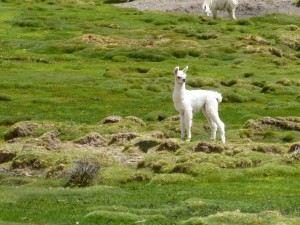 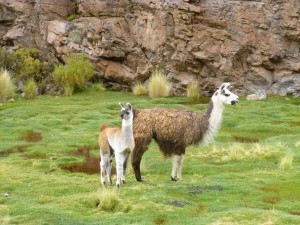 Post the Valley of the Llamas we stopped in our first typical Bolivian village where we got talking to this absolutely beautiful child. She was mesmerized by our western looks and we were by her. She was so happy to be playing in the dirt and show us her toys. Possibly the cutest thing we have seen and experienced in our time in Bolivia. The children are so happy with their lot as they don’t know any better. This was just the very start of our realisation of how previliaged we are with the most basic of items, warm water, electricity etc. 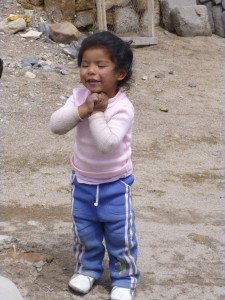 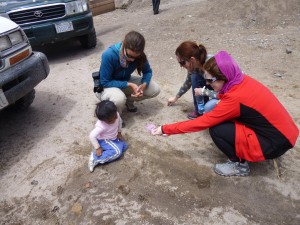 Later we stopped for a 2 hour lunch in the middle of the dessert where we had a great lunch and hiked around the cool rocks that surrounded us. I think it was one of those afternoons I will treasure for a long time (also the last day I felt heat on my skin). 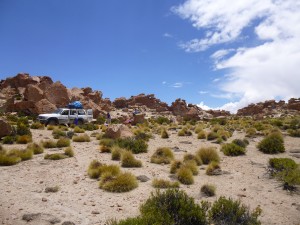 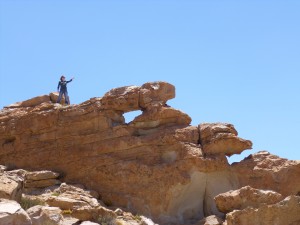 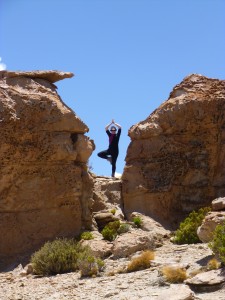 As the rain started to come down our drivers got us to our accommodation for the night. We were all super excited as it was supposed to be in one of the Salt hotels near Uyuni but as we came to learn very quickly just because that was supposed to happen doesn’t mean it will. Expect the unexpected as my title says is typical of Bolivia. Instead we rocked into this bleak, bear, impoverished town called ‘Colpina K’ that had never seen a western tourist or the likes. We were really in for a treat. Here we saw the first Bolivians dressed in traditional dress and the women, oh my god the Women heaving around sacks and sacks of maize and what not on their backs. At one stage, one the women asked Niamh to help her mount the sack on her back and Niamh was so shocked with the weight, at least double the weight of the poor woman herself that Niamh offered to walk her home. Home I imagine was an hour away at least. The lady laughed and Niamh was left standing there in shock, it was one of those moments where you didn’t know whether you wanted to laugh and cry at the same time. We stayed in what could only best be described as a half thatched/half tin roof accommodation with no running water for toilets or showers but with electricity and food in the form of Llama! yes we ate Llama..much like beef and thankfully well done, Norma 1- Typhoid -0. We retired to a game of Snap post dinner as the thunder storms came down for the night.. Snap, Niamh and I’s speciality game of skill we teach all our fellow travelers! We had so much fun! Will share pics again when wifi returns to full strength.

The following day started early to avoid the rain, as its rainy season every hour you are free of rain you make the most of it.

We went to the famous train grave yard first that morning. Here I am childishly enjoying the random swing very much set up for tourists! 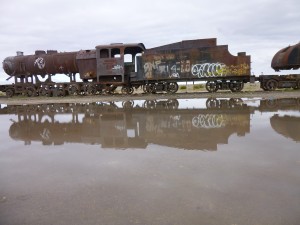 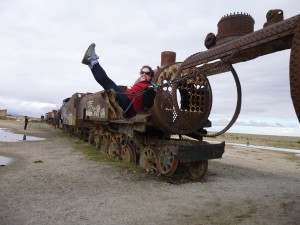 Then a good hour later we were in the heart of the largest salt flats in the world. It takes 8 hours to drive from one side to the next! Crazy. I don’t even think the pics do it justice. 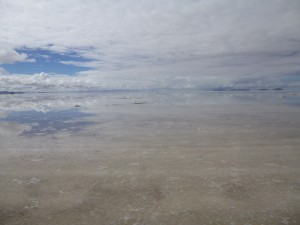 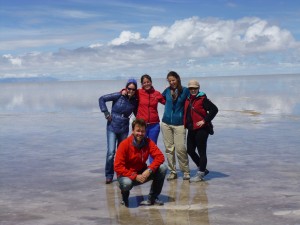 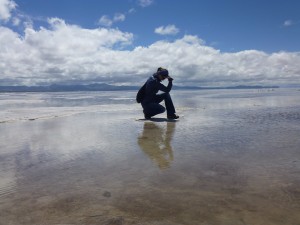 We spent a good two hours here playing the usual camera tricks before we returned to the nearest village next to the salt flats for lunch. This was our last stop after three amazing days with the coolest group we could have wished for. Next stop was Uyuni itself where we would stay for a night (not as bad as people say). I will update you again about our brief stay here before we moved onto the mining town of Potosi where our eyes were opened to the sad reality of the life of miners. Nothing prepared us for those two days in Potosi.

thanks for reading will update soon again. Night  x