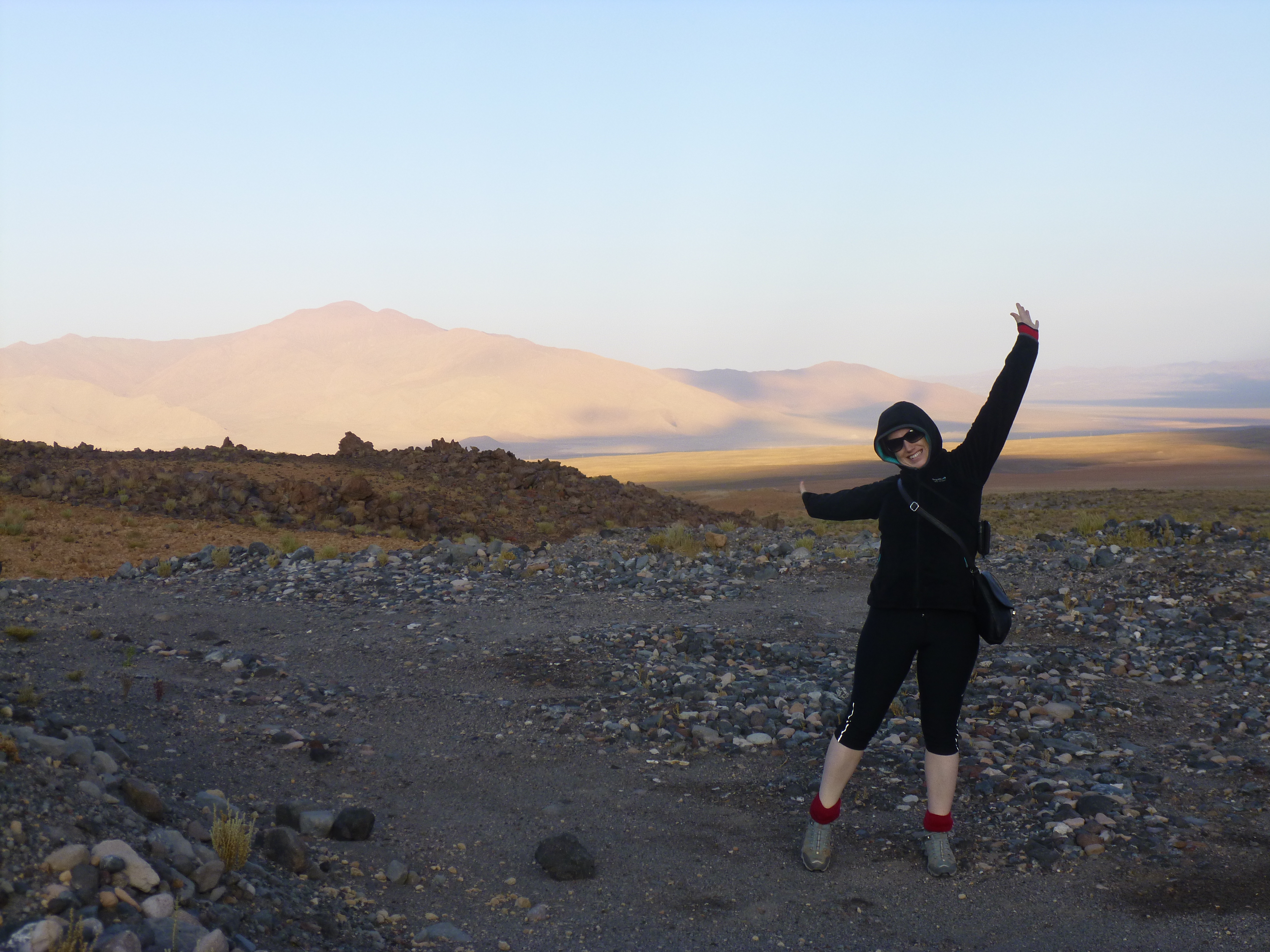 The town of San Pedro de Atacama, Chile  by night. 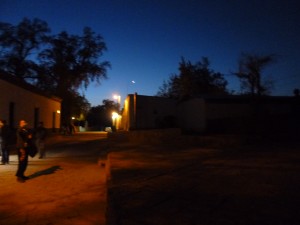 Where I left you last,  we were about to have our last night of three in Chile. It had been far too short, the days we had were the equivalent of an amuse-bouche (a pre-starter) of Chile in comparison to what should be a 7-course meal. Well it was some amuse-bouche. We absolutely fell in love with the little dessert village of San Pedro. Ok yes its touristy but there is a rare energy to the place, a buzz with great restaurants and rambling musicians that play from bar to bar.

We met with Ruth, the lovely Swiss girl that we had met two days previously. She was joining us on our 4×4 trip to Bolivia from the following morning. We choose this cool place with an open fire with local entertainment and yes it was panpipe band! 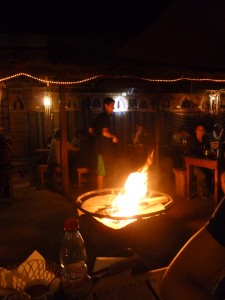 Niamh and I had booked an observatory tour to see the stars and the planets and unwisely we had opted for the 11pm tour (well truth be known we had no choice it was that busy). When was the last time you started a tour at 11pm well ok maybe culture night but after a long day we were yawning before we even got on the bus. We were driven out to the heart of the desert, where a Chilean lady and a French man, a married couple who were trained astronomers greeted us. Alan the French guy was hilarious! Who knew? Star gazing geeks could be such a laugh. He thought us the most amazing things , which I would love to share with you but alas I remember so very little I was that exhausted. In fact I was so tired that at one stage I asked a question about ‘shooting stars’ and was asleep by the time he answered it. Some audience I was.

No really, there were 10 giant telescopes and we saw Jupiter, the Southern Cross, Taurus, Aries , The Seven Sisters and many more it was very cool, Even though hand on heart I must saw the skies of Western Australia or Ireland for that matter could rival it hands down any day as it was slightly cloudy and only 5km from the town. Its only in the outback you can appreciate what complete darkness means with no man made light is around. Anyway back on the bus we got home at 2am only to be ready for our tour at 4.30am, yes 2 hours sleep or a power nap as some people call them is all we had.

Our tour had to begin early as there were to be border issues and a change of route due to rain and strikes in some of the national parks on the Bolivian side. Mixed reports on whether there were strikes or civil unrest between some villages.

We were in for a treat that day as it really was about to be the unexpected. The one thing you will learn from backpackers is the scare mongering is rife and particularly about Bolivia! Whether its food stories of llama meat giving you typhoid or border crossing tales of woe, we had heard them all. Niamh has a fatalist view on this trip if it will happen it will happen and if it wont it wont. It’s the best way to take a trip into Bolivia as you just never know what could happen in an average day, hour, minute.

Our driver collected us at 5am that Monday morning, where we were joined by a bus full of other travellers. This bus brought us as far as the border where we transferred into jeeps. This trip was a 3 day/ 2 nights in a 4×4 which would bring us over the border into Bolivia and then spend the next three days visiting the most spectacular scenery in the Andes,  from lagoons to multi-colour mountains, canyons and geysers. We were matched up with 3 other people, luckily as normally the jeeps take 6. We travelled in convoy with 2 other jeeps with overall 17 people from Brazil, Chile, Germany, Switzerland, Uruguay, Holland, Hungary and of course our good-selves the token Irish. The drivers were Bolivians who only spoke Spanish but thankfully between Ruth and Niamh and some of my Spanglish we figured it out. Below an early morning stretch, it was taken around 6.30am just at sun rise. 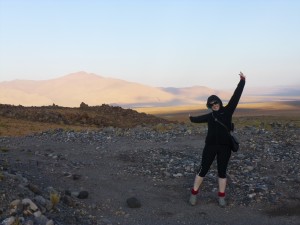 Saying goodbye to Chile we landed at their border to get our stamp out, here we realized it really was time to say goodbye to summer and hello winter. We dressed rather stupidly that day in three quarter length trousers and a few layers. Standing at the bleak border crossing we realized right we must get at our hats and gloves etc. out of our full backpacks before we head into Bolivia. The Copacabana beach of Rio seemed so far away at this point!

That border crossing was no bother as long as you had that random slip of white paper we had gotten 3 days previously. The driver was nervous, as the Uruguayans guys hadn’t theirs. It was all grand in the end and we were back on the bus to the next border Bolivia. This is the weird part you drive for around 20 minutes and for those minutes you are in no man’s land. You are not in Chile but you are not in Bolivia yet either. Bit like the Simpsons where Bart goes between Australia – America! Yes I did re-inact my own Chilean–Bolivian version. 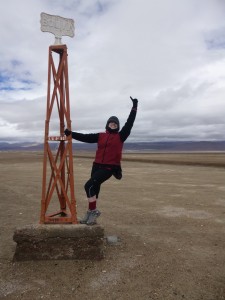 For those who have had the pleasure of Limerick Junction (train station) on a cold wet winters day, try picture the Bolivian border crossing adding around 150% more bleakness, a train grave yard, a bus load of Japanese tourists with face masks and some silly westerns in shorts who never knew it was going to be so cold. Furthermore there was a line filled with people wondering whether to bribe the guy or not to as we all heard the stories it was best to hand over the cash and don’t ask questions. Not unless you are cheeky in which case you ask for a receipt once you haven given the cash. Although you could nearly smell the corruption from the officials we experienced no such nonsense thank god. It was much easier than the Argentinian to Chilean affair but they both shared altitude issues.

Back on the bus we were driven over the border to meet our new 4×4 drivers and our group of 5 was formed. There was the cutest couple ever, Daan and Gertine from Holland, the lovely Swiss wedding planner Ruth, Niamh and I. We had met Daan and Gertine on our travels already so were delighted to join them on this great adventure for the next 3 days. At this point we were given some breakfast, it was still not even 8am and we had crossed the border and started to use the wonderful toilets in Bolivia also known to us as behind a shrub, bush, rock or anywhere you could hide! Years of festival experience stood me in good stead for the coming days when it came to all things sanitary or the lack there of.  At this point of my trip of Bolivia I would take the ‘natural’ choice over the paid un-flushable filthy dirty banos (toilets) that speckle the country. 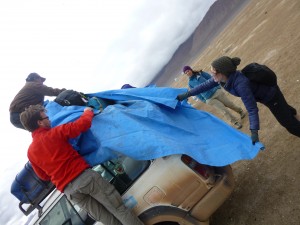 The rest of the day was pretty much covering ground to make our way to the first of the lagoons and the random hostel/fancy cow-shed we stayed in for the first night. We started to see the beautiful lagoons and their beautiful colourful inhabitants the flamingos. Over 30,000 of them hang out there during these months of Jan. and Feb so we were spoiled by their rouge and pink feathers reflecting in the water in the distance. 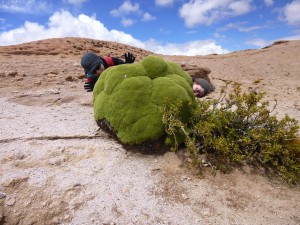 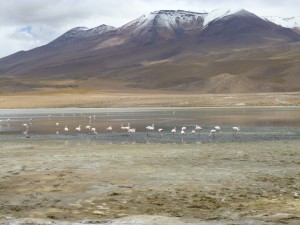 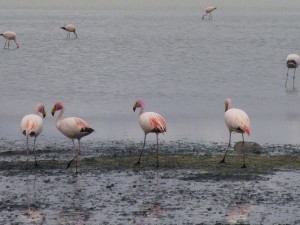 After 12hrs of driving up and up over the Andes Mountains,  we arrived to this random place in the middle of the desert where only Edgar Allen Poe could have written that poem. ‘The Tell-Tale Heart’. ..’the heart, the heart the beating of the heart’ as I really felt the affects of the altitude.

Although exhausted I really couldn’t sleep a wink that night and couldn’t wait until everyone in our 6 bed dorm woke so we could go on our geyser tour the next morning at 4.30am. It was the longest night of my young life. Nobody tells you about the altitude in Bolivia.  Be prepared lots of water, aspirin, a raised pillow so your head is higher than your body and drink some Mate de Coca.  That night we were at 4200 meters above sea level, honestly not for the faint hearted.

Next update will feature all the amazing sites of our trip around the south west of Bolivia including the Salar de Uyuni. Keep an eye out for my next installment over the coming days. 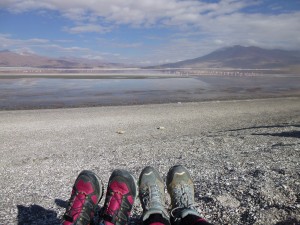