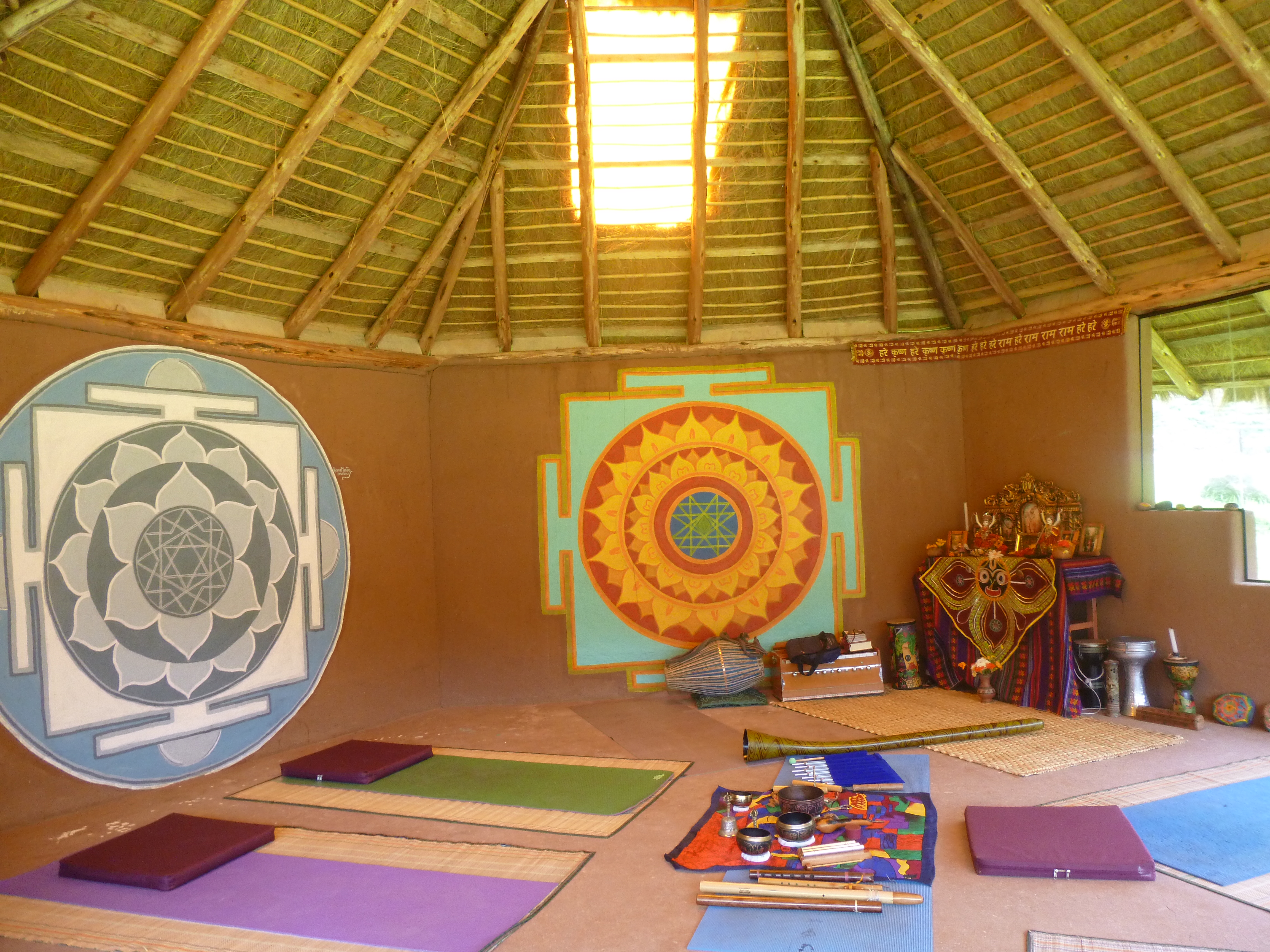 Hanging with the Harris – 23rd of Jan 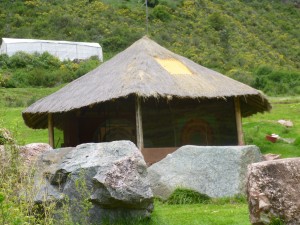 Yes you guess right the Hare Krishnas! ( I couldn’t put Hares..as you’d think I had joined a Rabbit cult!)  I’d only love to leave it there and let your imagination run wild as how we came about to spend some time with the men of the cloth known to many as the Hare Krishnas. Yes the ones who beat the drums through the streets of Dublin and London chanting their Hare mantras through their makeshift Madonna like microphones. The very ones!  Well if you remember back in my intro, I spoke about yoga and my love there of. Well Niamh is no different, in fact she is the guru of yoga of the two of us, years of dance stood her well before taking up yoga 2 years ago. Her natural ability to get into postures knows no bounds and she makes it look so easy, I’m very jealous as I knock myself out with some basic moves. Still I love it though and that feeling after  a good class.

Well anyway after feeling a bit rough from all the going, I got a bit of a bug when we landed in Cusco but 18hrs sleep sorted it but I needed some strength if I was to do my trek 2 days later.  We had previously spoken about doing a yoga class on the trip so the time was right to find one in the heart of Cusco. Now Cusco is not renowned for yoga in fact it is quite the party town but I knew with the volume of tourists in the town there had to be a few places offering it.

Well the powers of Google led us to such a place, ‘Inbound Yoga’ and on the Tues night we set out for our 5.30 class. Our Colombian teacher David had us in downward dogs within seconds and we were back in the groove in no time. By the end Niamh was doing head, hand and shoulder stands, I obviously sat those out and watched on in awe. Any attempt at similar and I would have impaled myself like a fly splatted on the wall.

Post class we enquired about day treks and half day yoga retreats we previously saw advertised we both felt what better way to warm up the muscles the day before our Machu Picchu trek than to get a little trek in and some yoga. The innocence of our inquiry led us to this Veggy Cafe of Crusty Hippies around the corner. Yes, the most stereotypical bunch of vegetarians you could find in any square metre in the world. At first we were disappointed to hear that they had no such trip running the following day and we left there, one jasmine tea fuller as we provisionally booked for a massage instead after our trek.

A few hundred yards down the road was we giggled away at the previous few moments, Niamh felt a tap on her shoulder, Druvan, one of the Ashram gurus/sound healers had chased us down the street to say yes he could offer us an alternative for the next day and would we come back to the cafe to organize  it.

And so it was 7.30am on Wed the 23rd of Jan, Niamh and I were off to hang with the Hare’s. And now the most hilarious part of the whole story was it took Niamh over 5 hours to figure out that they were in fact apart of the Hare Krishna community, I had that bad boy pretty much licked once we arrived and I saw the dudes with the orange attire and the drums sitting in the corner.

After a guided tour of the farm and yoga retreat spread over 2 acres of land in a beautiful valley one hour outside Cusco, we were served breakfast outside on mats overlooking the Valley. The yoga farm are the buildings on the right of the valley here, spectacular. 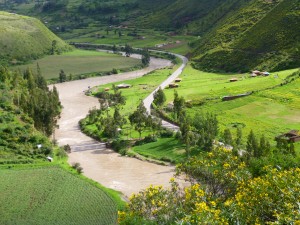 Post breakfast we had a talk from Druven on ‘Yoga philosophy’ aka an intro to ‘The International Society for Krishna Consciousness’ all with a lovely soft tone of explanation and nothing too heavy. I nearly nodded off a few times. Post this we had 1 hour sound therapy in this beautiful room. 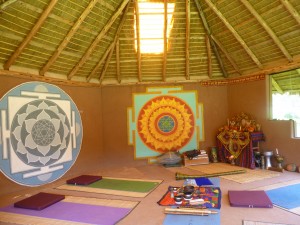 Their home, looks fancy but very basic inside, electricity from a generator and no Wifi people. No WIFI! 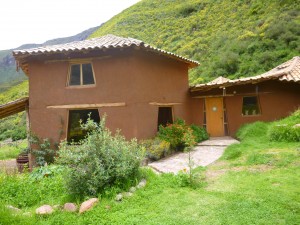 After this ‘therapy’ we were served an amazing veggy lunch where lentils although a dark greeny/brown were the most delicious veggy concoction I had tasted on the trip! 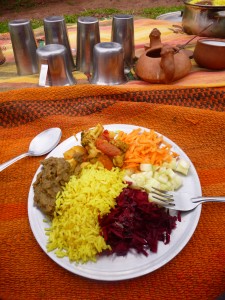 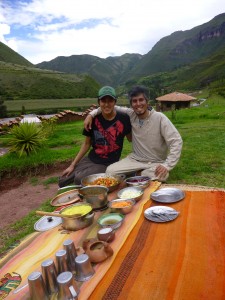 Once we got this food down us we set off an brief hour trek overlooking the farm. This was Niamh and I’s first realization that the altitude does really knock the stuffing out of you on the basic of uphill battles. We had to laugh nervously and hope for the best for the following day. 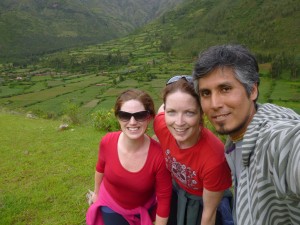 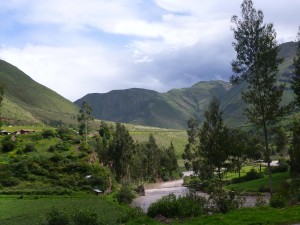 Niamh also was introduced to the land’s creatures that she had forgotten about..yes the hairy variety! 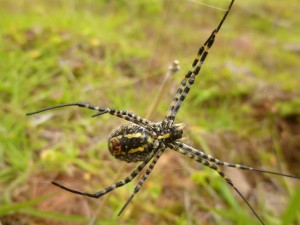 Back at the camp post our brief hike our cool yoga teach Ramon awaited us to finish off the day with tree poses and what not. This guy was the Dude of yoga, a pea size pocket rocket of energy and enthusiasm. He was fantastic! He promised us we would feel the benefits/pain of his class on our hike the next day.. and we did but it really did the job to help us.

We were so sad to say good bye to our lovely new bunch of Harre friends and although the parents here would love to think we ran off and joined their circus we are far too cyclical for that business and although we can appreciate their way of life and try and understand it for now we take the yoga and the benefits of that run back to our comfortable western lives. 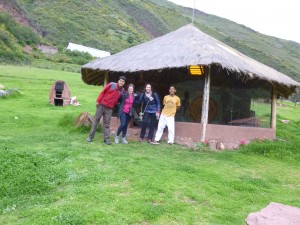 In the footsteps of the Incas